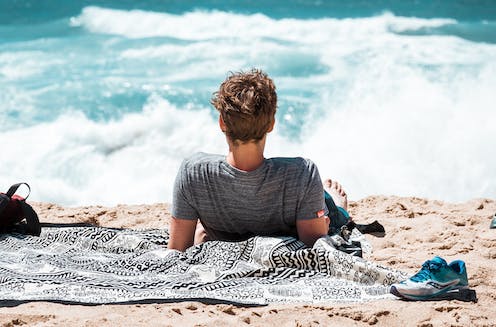 It’s impossible to avoid the Aussie sun entirely, but Australians are well aware of the dangers of too much exposure. Some 40 years of Slip Slop Slap (and more recently added, Seek and Slide) campaigns have reinforced this, not to mention the unpleasant experience of a sunburn most of us have encountered at some point.

Skin does repair itself, but how long does that take? If you hit the beach for half an hour, then retreat to the shade for a while, then go back out, will the damage have gone back to baseline? Or are you accumulating it?

How does the sun damage your skin?

Spending a day in the sun can cause 100,000 DNA defects in each exposed skin cell. DNA is the genetic information your body needs to build and run itself. There’s a copy in each of your cells, except for red blood cells and the layer of dead cells at the very surface of the skin.

Your cells have a very effective DNA repair process, called nucleotide excision repair, for this kind of damage. But some damage still slips through the cracks.

When your skin’s DNA monitoring system decides there is just too much damage to be effectively repaired, it tells the cells to self-destruct and calls in the immune system to finish them off. This causes the symptoms of sunburn: redness, pain, and sometimes blistering.

Read more: Explainer: what happens to your skin when you get sunburnt?

However, you don’t have to get sunburnt to start accumulating damage. A tan is your skin reacting to DNA damage by increasing the amount of melanin, which alters the skin’s colour, to mitigate future UV exposure. Though this only gives you the same protection as a 2-4 SPF sunscreen.

UV radiation in Australia is so high, particularly during summer, that you can start accumulating damage in the time it takes to hang out the washing or walk to the bus stop.

In the time it takes to hang the washing out, the sun can damage your skin. Shutterstock

Remind me, what is UV radiation?

These act in two different ways to damage skin, but due its cancer-causing properties, UVB is the better studied.

Light particles (UVB photons) discharge energy when they hit DNA. This causes bases on one DNA strand to connect to each other, instead of their corresponding bases on the other strand.

‘Before’ shows a normal DNA helix. ‘After’ shows how excess energy from light causes the bases on DNA strands to link up incorrectly. NASA/David Herring

This distorts the DNA helix, so it doesn’t copy correctly when it’s time for the cells to divide.

And it causes permanent mutations that are replicated whenever the daughter cells multiply, setting the stage for skin cancers.

Even an exposure of half the amount of UV needed to cause a sunburn is enough to start generating these DNA defects.

How long does the damage take to repair?

Once they’re formed, the half-life of DNA defects is 20-30 hours, depending on the efficiency of your own DNA-repair machinery. That means it takes 20-30 hours for your cells to repair even half the damage.

In one study that took samples at 24 and 72 hours after exposure, almost 25% of the damage detected at the 24-hour mark was still present at 72 hours.

So if you’re already on your way to a sunburn, no, stepping away from the sun for 20 minutes to get an ice cream is not going to cut it. Your skin will eliminate most of the damage over a few days. But some may be missed or not found before the cell replicates.

Read more: How to treat sunburn pain, according to skin experts

You’re better off minimising damage in the first place by planning to hit the beach early, spending the middle part of the day reading your new murder mystery in the shade, and perhaps returning to the sands from mid-afternoon.

Alternatively, you could extend your time in the sun by covering up extensively with a long-sleeved rashie, thick leggings, hat and frequently reapplied sunscreen on anything not covered up – and don’t forget your feet!

Get into the habit of wearing sunscreen every day

To protect your skin, apply sunscreen as part of your morning routine on any day when the UV index is forecast to be 3 or higher. This will prevent an accumulation of damage from brief exposures like hanging out washing or walking in from the carpark.

Apply sunscreen as part of your daily routine. Pexels/Karolina Grabowska

Most weather forecasts will tell you what UV to expect but in Perth, Brisbane and Darwin it’s over 3 all year around.

If you’re going to be outside for a prolonged time, add sun protective clothing, a hat and sunglasses, reapply your sunscreen at least every two hours, and stay in the shade where possible.

If you do get sunburnt, the best thing you can do for yourself is stay out of the sun for a few days until the redness goes away. This lets your body deal with the damage as efficiently as possible without piling more on.

Read more: 4½ myths about sunscreen and why they're wrong