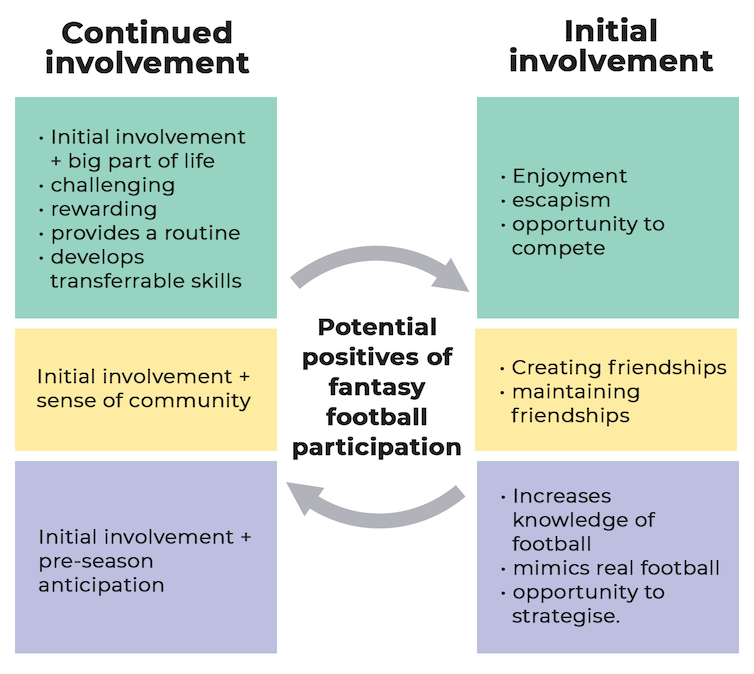 Erling Haaland or Harry Kane? Mo Salah or Marcus Rashford? Use the “triple captain” chip or save it?

This weekend (and pretty much every weekend until the end of May), millions of people around the world will be making these sorts of decisions, hoping the right call will take them a step closer to fantasy football glory.

Glory or not, fantasy football should be a fun, enjoyable hobby… right? Recent research – including a newly published study – sheds light on whether that really is the case.

For the uninitiated, fantasy football (“soccer” in some parts of the English-speaking world) is a game in which you select real-world players for your virtual team, with their subsequent real-world performance dictating your team’s score.

Many versions exist, but the basic premise is that points are awarded for doing good things (like scoring a goal) and deducted for doing bad things (like getting a red card). The virtual team with the most points by the end of the season, wins.

Fuelled by advances in smartphone technology and social media, fantasy football has rapidly grown to become a key meal in a fan’s football consumption.

You would think this would be a good thing, but take a quick scroll through the fantasy football “Twitter-verse” and you will soon find not everyone seems to be enjoying it for what it’s meant to be – a game.

This Twitter toxicity is what led colleagues and I to publish the first scientific paper exploring the impact of fantasy football on mental health in October 2021.

Not all fun and games

In our study, 1,995 fantasy football players (representing 96 different nationalities) completed a questionnaire on their anxiety, low mood, daily functioning, and problematic behaviour in relation to the game. Importantly, players also told us about their engagement (primarily the time spent playing the game) and experience (the number of years playing the game).

The good news was that for most respondents, fantasy football did not seem to have a negative impact on mental health. However, given the popularity of the game, it is notable that 3.4% and 5.1% of the respondents reported having moderate to severe anxiety and low mood in relation to the game, respectively.

In a game played by over 10 million people, that could be hundreds of thousands of people negatively affected by what is meant to be a fun and enjoyable hobby.

It’s unclear why this is, but we think it’s possible that over time, players develop coping mechanisms or even an emotional “numbness” towards the game.

Our first study provided insights into fantasy football’s potential harmful effects on wellbeing, but failed to investigate the numerous positives that inevitably must exist (why else would it have become a global phenomenon?).

We decided to address this by carrying out a follow-up study. This time, we took a qualitative, interview-based approach to paint a more holistic and detailed picture of what goes on when people take part in fantasy football. This paper has just been published in the journal Entertainment Computing.

We interviewed 15 experienced male fantasy football players, and thematically analysed the resulting data. Overall, it was found the game appears to have a much more positive than negative impact.

Aside from the obvious enjoyment factor, benefits included the creation and maintaining of friendships; an increased knowledge of football; the opportunity to strategise, compete, and develop transferable skills (such as an understanding of maths and statistics); escapism; and the provision of structure and routine to one’s week.

We also teased out some negatives. Responses from all participants lent support to our original study which highlighted fantasy football’s potential harm to wellbeing. “Anxiety-provoking”, “frustrating”, “addictive”, “affects self-confidence” and “disappointment and regret” were prevalent enough to warrant sub-themes of their own within the analysis.

Participants were also keen to mention the negative online impact – particularly through social media – that accompanies the game, as well as the intensity of involvement the game was perceived to require.

Perhaps of most importance was the identification of seven factors which we believe can be used by game creators and game players alike to help optimise participation in fantasy football.

For instance, we propose that if you think success in the game reflects your knowledge of football in the real world, it will lead to predominantly negative experiences. Likewise, it’s not wise to invest excessive time at the expense of other areas of life.

Players and game creators should aim to foster the factors in the green box (and deter those in the pink box) in order to optimise the experience of playing fantasy football. Proposals for improvements to the game (blue box) come from post-hoc, quantitative data collected from participants after the interviews. The Conversation/Author provided, CC BY-ND

Some of these are clearly easier said than done, and others may actually be incompatible with one another.

Nevertheless, we believe through identifying these factors, we can help players become more mindful of their fantasy football involvement, and the impact it may have on their mental health.

Like with most things in life, balance is key for fantasy football. The growth of the game shows no sign of slowing down, so it’s important for players and game creators alike to act now to improve the playing experience. If we don’t, making that call on Haaland or Kane will continue to have a greater consequence than it ought to.