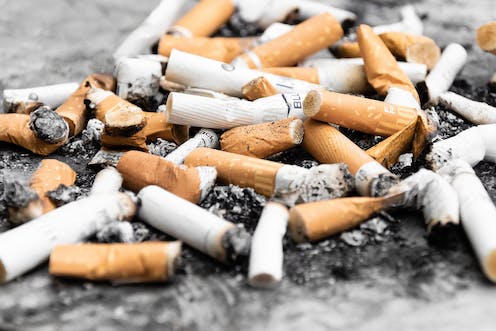 This week’s announcement of a raft of new tobacco control measures – including banning menthol products and proposing health warnings on individual cigarettes – are important and welcome.

We applaud Australian Health Minister Mark Butler’s aim to re-establish Australia as a global leader in tobacco control alongside fellow OECD nations, such as New Zealand and Canada.

His announcement comes a decade after Australia implemented world-leading laws that required all tobacco products to be sold in plain packs.

But there is still scope for more comprehensive action to reduce the burden smoking imposes on Australia and particularly on Australia’s Indigenous peoples.

Read more: We can cut Indigenous smoking and save lives – here's how

We can look to New Zealand

Aotearoa-New Zealand offers a useful comparison. The NZ parliament aims to pass legislation in mid-December that takes a different approach to the measures Butler outlined this week.

The Aotearoa package of measures were developed in close consultation with Māori leaders. These include making cigarettes non-addictive, greatly reducing the number of tobacco retailers, and creating a smoke-free generation.

These policies focus on fundamental drivers of smoking. The measures will also affect everyone in the same way, thus have great potential to reduce pervasive inequities in smoking rates.

Let’s see how Australia’s plans compare with policy reforms under way in New Zealand and Canada.

Graphic images on packets of cigarettes were introduced in Australia 16 years ago, and these warnings have encouraged quitting. But they have lost their initial impact.

New and more varied warnings will refresh this existing policy as will introducing pack inserts providing “how to quit” information, which have been used in Canada since 2012.

In 2023, Canada is set to become the first country to require health warnings to be printed directly on the cigarette stick.

Butler proposes adopting this measure for Australia, but with the addition of making the cigarette paper an unattractive colour, such as slimy green or faecal yellow-brown.

Like plain packaging, this measure will reduce the appeal of smoking and present smoking as unambiguously harmful and unattractive.

Likewise, measures that eliminate gimmicks – such as flavoured “crushballs” inserted in filters that release a burst of flavour when crushed, or packs that include “bonus” cigarettes to offer a better deal – will further limit how tobacco companies promote their products.

Banning some flavouring additives, particularly menthol, will reduce the appeal of smoking for some consumers.

Read more: The US FDA has moved to ban menthol cigarettes. Australia should do that and more

Tobacco companies will need to disclose tobacco sales volumes and pricing, as required in Aotearoa-New Zealand.

Companies will also need to disclose their advertising, promotion and sponsorship activities, as well as product ingredients and emissions.

They will also provide key information about what is in tobacco products, as required by the World Health Organization’s Framework Convention on Tobacco Control.

Vaping ads to be banned

The final measure will apply tobacco advertising bans to vaping products. This policy will reduce inappropriate promotion of these products, including to young people.

This measure is in addition to, and separate from, the current review of Australia’s regulation of nicotine vaping products. Addressing the rising problem of vaping among young people is a key concern and efforts to reduce youth use are urgently needed.

Read more: We asked over 700 teens where they bought their vapes. Here's what they said

There’s more to do

These advances in Australian tobacco control policy align with measures implemented a decade ago in Canada or that are soon to start. We welcome such measures that make smoking less appealing and encourage quitting.

However, bigger jumps are required if Australia is to lead on eradicating the harms smoking causes. These initial measures announced also do not have a clear equity focus, such as the measures being implemented in Aotearoa-New Zealand. These have a bolder ambition of rapidly reducing smoking among both Māori and non-Māori peoples to less than 5% by 2025.

Aotearoa-New Zealand’s proposed law will fundamentally change tobacco products by reducing the nicotine content to non-addictive levels. The law also dramatically reduces tobacco availability by decreasing the number of tobacco retailers by at least 90%, and will make it illegal to sell tobacco to anyone born after December 31 2008.

Modelling indicates that Aotearoa-New Zealand’s package of measures are likely to achieve their goal of rapidly phasing out tobacco smoking.

Read more: New Zealand’s ‘tobacco endgame’ law will be a world first for health – here’s what the modelling shows us

These measures go far beyond those Butler proposes for Australia. In particular, removing the product’s addictiveness and reducing availability means casual experimentation among young people will not lead to addiction, and quitting will become much easier for people who currently smoke.

The package of measures announced this week will continue declines in smoking following the “tried and tested” strategy of incrementally ratcheting up restrictions on tobacco products.

In contrast, the Aotearoa approach is a “Tobacco Moonshot” that aims to finish the job of ending the tobacco smoking epidemic in Aotearoa-New Zealand.

The authors would like to acknowledge Tony Blakely, University of Melbourne, and Andrew Waa, University of Otago, for helpful comments and suggestions.