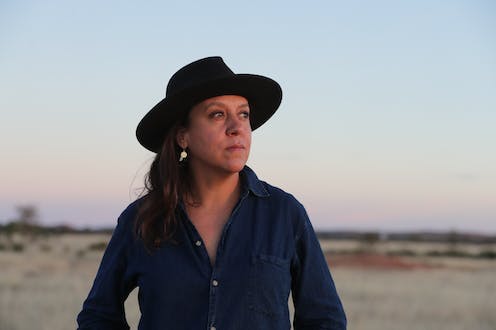 The Australian Wars is a new three-part TV series directed and produced by Arrernte and Kalkadoon nations filmmaker Rachel Perkins.

Perkins travels across vast territory to capture key aspects of a war that lasted more than 100 years, from the landing of the First Fleet in 1788 until the 1920s.

The series traces some of the key phases, sites and underlying features of frontier wars here on home soil.

It sets out to understand why the war was never declared, why the British didn’t follow their own laws, and the tactics and strategies Aboriginal people deployed defending their land and survival.

Perkins asks us to consider this difficult history, why there are only a handful of monuments to this warfare, and how it should be memorialised.

The series treats the viewer with the ability to critically reflect and ask why we still struggle to come to terms with this history.

The Australian Wars is an important contribution to truth-telling. Perkins provides a public reckoning with the means by which the British Empire – followed by independent democratic Australian governments – managed to grab the entirety of the land assets of the continent.

The dominant narrative of Australian settler colonialism was once sunny tales of possession, sustained by hard toil. Aboriginal acts of resistance, refusal and warfare were somehow miraculously omitted.

Only in recent decades has a more truthful account of the past emerged. New conversations and responsibility are slowly navigating the realities of the frontier, the shared history of “both sides” and how the past can be remembered.

Reconciliation Australia’s “Reconciliation Barometer” survey identified only 64% of non-Indigenous Australians believed the frontier wars occurred. Some 30% of respondents were unsure and 6% rejected the factual accuracy of significant aspects of Australia’s colonial history.

The documentary returns to the theme of rejecting this part of Australia’s history and asks: how can the frontier wars be remembered and memorialised?

Perkins reminds us that as many people – both black and white – died in the frontier wars as did in overseas conflicts featured at the Australian War Memorial.

The Australian Wars draws together experts of Australian history, detailed studies of the expansive colonial records, the oral testimony of survivors’ descendants and new archaeological research.

With this trove of references, Perkins reveals the extent and breadth of violence, the global networks of military men and the strategies they honed on the frontier, and the technology that came to enable this.

Ultimately, we learn unfettered access to the land resource was the driving factor. The rule of law, claims of humanitarianism and Christianity were readily dispensed with in pursuit of land.

Perkins begins this story in the nation’s capital at the War Memorial. She then follows the moving frontier from the Sydney settlement to Tasmania and crossing Bass Strait. The story then moves with rapid pace from south to north and across the top end to the Kimberley, as settlers expanded across landscapes in always violent encounters.

She dispenses with the abiding myth Aboriginal people didn’t fight back.

In each location Perkins focuses on, we see different strategies deployed, tactical advantage held at times by Aboriginal people, the fear and terror struck in the settlers, and the military actors and strategy that underpinned the colonial settlements.

But the Aboriginal peoples whose lands were being invaded were fast developing new tactics.

In Queensland alone it is estimated 72,000 Aboriginal men, women and children were killed.

How do we remember?

The series prompts us to ask: if not war, then what do we call the process by which the land, once all carefully delineated and peopled, is occupied by settlers?

How do we remember this and memorialise those who died?

Perkins tells us this violence was often very well documented. This violence was acted against people whose eyes you could see. Yet from Lake George, just outside the nation’s capital, to the Sydney wars and massacres, Tasmania, Queensland and to the Kimberley, sites of violence are overwhelmingly unmarked, unobserved, save for colonial names: “Blackfellows Bones”, “Victory Hill”.

Leading Australian historian Henry Reynolds says the frontier wars are our most important war because of where they were fought and what they were about: the outcome determined the ownership and sovereign control of a whole continent.

As he comments in the series “what can be more important than that to us?”

The Australian Wars is on SBS and SBS on Demand from today.

Read more: Friday essay: it's time for a new museum dedicated to the fighters of the frontier wars