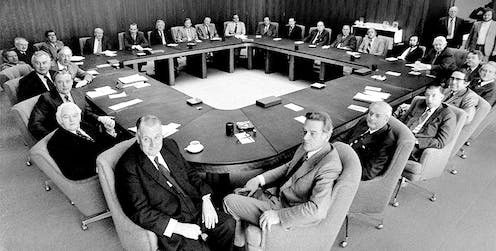 After leading the Australian Labor Party to its first federal election victory in 23 years, Gough Whitlam wasted no time.

The Tuesday after his election on December 2 1972, he formed an interim two-man cabinet – a duumvirate – with his deputy Lance Barnard, and set about changing the nation.

Modestly, he took only 13 portfolios, while Barnard got 14. The pair governed the country for two weeks until the results of the election were formally declared and a full ministry sworn in. None of this, however, was secret.

The Whitlam government’s enthusiasm for reform has left a lasting legacy. It introduced universal health insurance. It made tertiary education free. It lifted pensions. It abolished conscription. It established diplomatic relations with China. It began the process to recognise Indigenous land rights.

But it is also generally remembered for poor economic management. Many would regard this perception as the main reason Labor, having won a second election in May 1974, was trounced in December 1975.

Whitlam himself admitted his “preoccupations and predilections lay beyond the narrower field of economic theory”.

Certainly the Whitlam government’s economic performance was far from perfect. But it deserves a better reputation than it has. Fifty years on, we can now see how much the circumstances of the time coloured perceptions.

Campaigning in 1972, Whitlam scoffed at the 3% annual economic growth achieved under the incumbent McMahon government. He aspired to achieving 6-7%. But he ended up actually achieving less than 3%.

We can now see this wasn’t the failure it seemed at the time. The growth rates of the 1950s and 1960s were atypical, and set unrealistic expectations. Since federation, in fact, average annual economic growth has been 3%.

A time of crisis

Like two other Labor governments – that of James Scullin in 1929 and Kevin Rudd in 2007 – Whitlam had the bad luck of taking office just before a large global economic downturn.

This was precipitated by the 1973 oil crisis, when Saudi Arabia and other OPEC nations refused to sell oil to the United States and nations that supported Israel in the Yom Kippur war.

Inflation peaked at almost 18% during the Whitlam years. It had been higher – almost 24% in 1951, under the Menzies government – and it had started climbing before Whitlam was elected. This was also due partly to global factors and partly to the McMahon government spending big to curry favour with voters.

Unlike the Hawke-Keating government, which kept union demands for higher wages in check in exchange for “social wage” improvements, Whitlam failed to convince the unions to curb their wage demands. This made stagnation worse.

But his government did take steps to fight inflation. It revalued the Australian dollar and raised interest rates. It established a Prices Justification Tribunal to discourage large companies from raising prices.

By the end of its term inflation was declining – though it was not until after the Reserve Bank adopted inflation targeting in the early 1990s that it was really back under control.

The unemployment rate rose – but perceptions of the severity of that rise were also coloured by comparisons with the historically low rates of the 1950s and 1960s.

Spending under the Whitlam government rose to its highest share of GDP since World War II. At the time, the opposition attributed this to waste and extravagance.

But no government since has returned spending levels to pre-Whitlam levels. This suggests the higher spending has mostly gone to things that are popular with the public.

The budget balance moved into deficit. This was unsurprising as the economy slowed under the impact of the oil shock.

This deficit no longer stands out, given those incurred in subsequent economic crises – the early-1990s recession, the global financial crisis of 2008, and the COVID-19 recession. It’s also worth remembering that some of the subsequent surpluses reflected the sale of public assets such as Telstra.

The start of economic reform

In some ways, the Whitlam government represents the start of the economic reform process that peaked during the Hawke-Keating years (1983-96).

Whitlam was sceptical of protectionism and started cutting tariffs. This was partly to reduce inflation by lowering import prices, but there was also a long-term goal to develop a more efficient economy.

His government implemented a new Trade Practices Act and reformed government entities such as tthe Post-Master General’s Department, which was replaced by the more commercially focused Telecom Australia and Australia Post.

The Whitlam government’s economic performance was certainly not perfect. But it deserves a better reputation than it has.