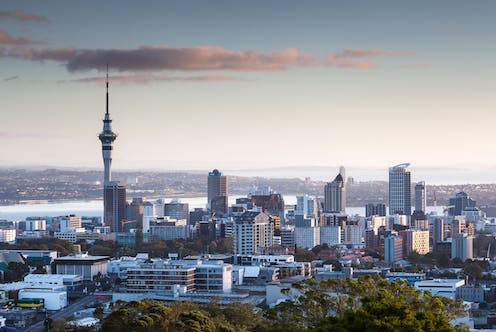 With local body elections currently under way, democracy makes its triennial appearance in New Zealand’s towns and cities once again. But elections alone don’t automatically make for democratic governance at street level. And this is particularly true of Auckland.

Since the unification of regional, city and district councils in 2010, the so-called “super city” has been run by a single Auckland Council.

It covers a diverse urban and rural region of 1.7 million people, spread across more than 4,894 square kilometres. The mayor and 20 councillors set the rates, pass bylaws and control city planning.

The 21 subordinate local boards have no rating or regulatory powers. On the old maxim of “no taxation without representation”, local board members aren’t representatives in a full political sense. It’s the power to tax that really matters.

So, in effect, 21 people represent 1.7 million. That’s a ratio of one elected representative to approximately every 81,000 people – somewhere between the populations of Whangārei and Dunedin.

By comparison, at the national level there is one member of parliament to every 42,700 people. Auckland has 23 electorate MPs, and 16 list MPs are based in the region. That’s 39 MPs in Auckland compared with 20 councillors and one mayor.

Ironically, Aucklanders are better represented in parliament in Wellington than in the council chamber in downtown Auckland.

Compare this also with Central Hawkes Bay District, for example, where there are nine council members, including a mayor, representing 14,142 people: a ratio of one to 1,571.

A vote there is clearly worth a lot more – roughly 53 times more – than one in Auckland. That other old maxim of “one person, one vote” comes to mind. Little wonder Hawkes Bay voted not to unify its local government along the same lines as Auckland.

Read more: NZ’s most walkable towns and cities ranked: see how your neighbourhood stacks up

While representing and taxing 81,000 people, an Auckland ward councillor is rarely heard or seen by residents between elections. Your chances of bumping into one in Queen Street to say “g’day” and tell them your thoughts are almost zero.

Local boards have no rating or regulatory powers, despite each covering populations the size of cities. In 2018, for example, the Waitematā Local Board area had an estimated 82,866 residents, and Devonport-Takapuna 57,975.

Whether you’re a farmer close to the northern or southern border of the council territory, or an inner-city student, the real decision makers are remote and largely beyond the influence of ordinary ratepayers and voters.

Compounding this had been the historical decline in voter turnout for local elections, with participation down to 42% in 2019. This is the opposite of general elections: following a low in 2011, turnout rose to 81.5% of those enrolled in 2020.

In Auckland, there are presently 22 candidates running for mayor, most of whom get no voice in the media. To get ahead in this election requires more than just competence and a good track record. You need plenty of money, wider political backing and, above all, media attention.

But media space is limited, so news coverage and live debates focus on those deemed to stand a chance of getting within the first three or four places.

This process, and the subsequent withdrawal of two centre-right candidates, has seen the media and pollsters anoint two remaining front-runners: the centre-right Wayne Brown and the centre-left Efeso Collins. Neither is clearly ahead in polls.

But given the forgone conclusions of previous mayoral contests, Aucklanders at least have a real electoral choice of leadership styles and visions for the city’s future.

Collins espouses a caring and inclusive approach that looks to the interests of the city’s worst-off, as well as its economic development. Brown pushes the pragmatic and task-oriented attitude of an engineer who prides himself on “fixing” things.

This close and less predictable contest may help boost participation. But it doesn’t negate the essential problem of genuine representation.

Auckland’s many problems are expensive to fix – and expensive to leave unfixed. The solutions frequently involve partnerships with central government, which to a large extent was the reason for unifying the region’s governance in the first place.

Cabinet ministers, it was believed, should be able to call one person – the mayor – when dealing with the city’s significant infrastructure deficits. Even so, much of the city’s real assets and services were carved off into “council-controlled organisations”, entities with their own governance structures. Many argue the council should exert more control over these.

Read more: Whose ‘identity’ are we preserving in Auckland’s special character housing areas?

Whatever the motivation, the outcome has certainly not been an improvement in local democracy. The governance of Auckland is remote from, and happens high above the heads, of ratepayers and residents.

This attenuated system of representation appears to reflect a national, indeed international, trend towards centralisation of government.

Not only has the unification of Auckland thinned out representation and put up barriers to participation, across the whole country we’ve seen central government overruling local government in matters such as public health, urban development and water use.

Regardless of where you might stand on those issues, we certainly hear a lot less about devolving decision making closer to those directly affected.